When Tricia and I travel anywhere, the first thing we look for is good food. We don’t look for fancy restaurants. It’s just not our thing. We look for food with big flavors and large portions. And I love sampling different cultures’ food. So when we realized that we have two and half days in Kathmandu on our trip to Nepal, we did our research.

Yelp doesn’t work in Kathmandu which was simply devastating. As a backup, we scrolled through restaurant reviews and food photos on Tripadvisor. Tricia and I both thought that the reviewers had been very generous. For example, Blueberry Kitchen here has a lovely patio and a 5 five star rating (520 reviewers). But by our tastes, the food looks meh. I’m sure it’s a cute place, but the food looked too western for a place that I had traveled 30 hours to get to. I wanted some local food. Tripadvisor is probably the best resource you will have when it comes to researching for food in Kathmandu, but we found that the bias on the site is definitely towards tourist-y food, at least in Thamel. Good looking local food was weirdly tough to find. 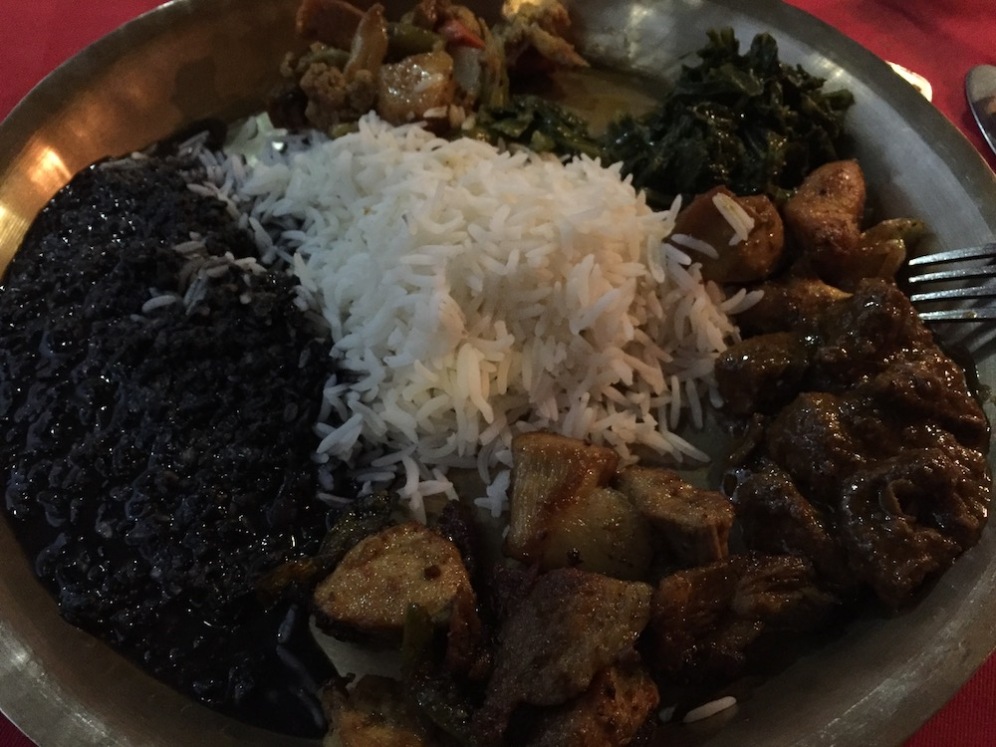 Our first meal in Kathmandu was a dinner in Thamel House Restaurant. The food was decent but we were tired and grumpy after 30 hours of flights and crappy high calorie airplane food. The ambience of this place was peaceful. Dramatic traditional masks hung on the walls for the obvious, but effective pleasure of tourists. We ordered their set menu meal. Since I didn’t have my usual appetite, I’m reluctant to review them based on my biased perceptions. I do remember the flavors were average. The price was about average restaurant price in the US which was about ten times too expensive for Nepal standards. It didn’t quite live up to a 4 star rating by 390 reviewers plus a local recommendation. We stayed at Ambassador Garden Home in Kathmandu both before our trek and after. This place is lovely. It’s located in the middle of Thamel across the road from a Western style supermarket. The grandfather of the owner was an ambassador to China in Qing dynasty which is why their lobby has a collection of curious art and artifacts. The staff there were incredibly friendly and arriving to smiles and complimentary tea and coffee set a pleasant tone for our trip. We didn’t have dinners here, but we had two breakfasts and some snacks. The first breakfast was packed to go because we left for the airport before 5am. It was simple: two hardboiled eggs, a cheese sandwich, a banana and a bottle of water. The second breakfast was after we returned from our trek. It was a normal western style breakfast served in their courtyard, which was quiet and peaceful. I highly recommend this place. 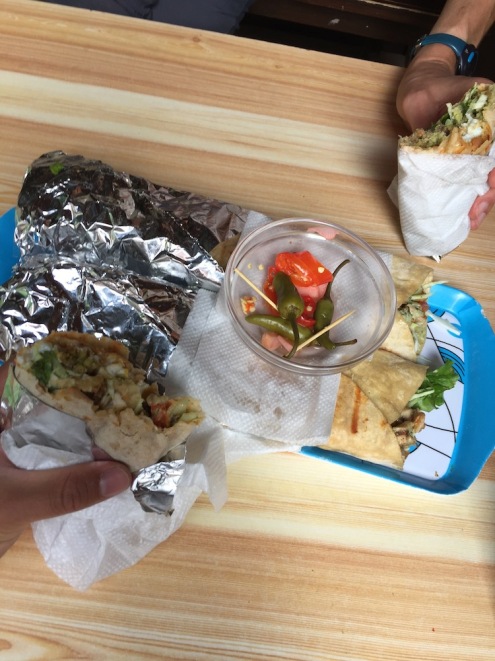 Falafel wrap in our hands 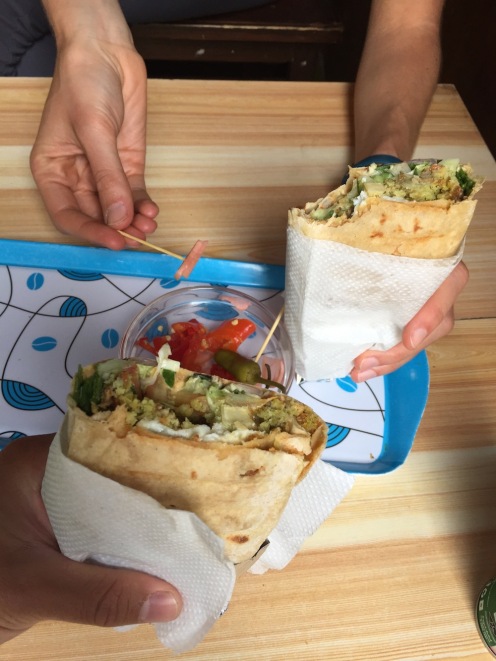 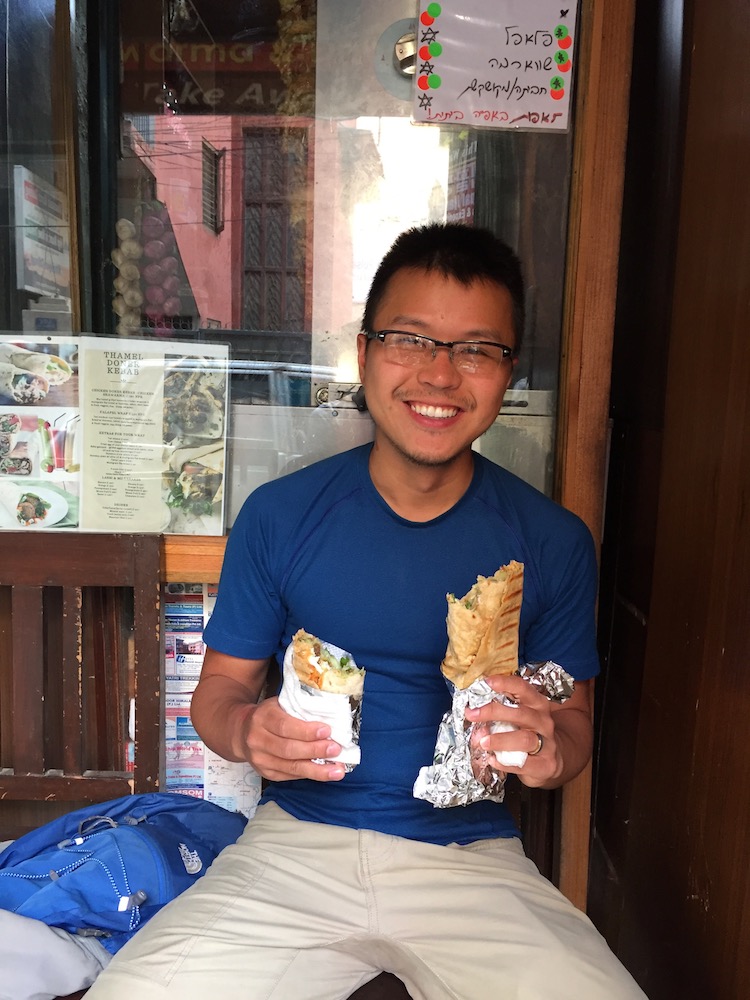 For centuries, Nepalese culture had been influenced by its neighbors: Tibet, India and China. This influence becomes obvious when you stand in the middle of Kathmandu Durbar Square where three drastically different architectural styles exist side-by-side. Nepal’s neighbors almost certainly influenced their food culture too. From the ubiquitous momo, which has obvious Chinese origins, to the spicy Indian-inspired food, cultural blending is pervasive in Nepalese cuisine. Today, tourists of Chinese, Indian and Western origins are by far the greatest foreign influence to Nepal. That is also evident in the type of cuisines you find in tourist neighborhoods like Thamel in Kathmandu. 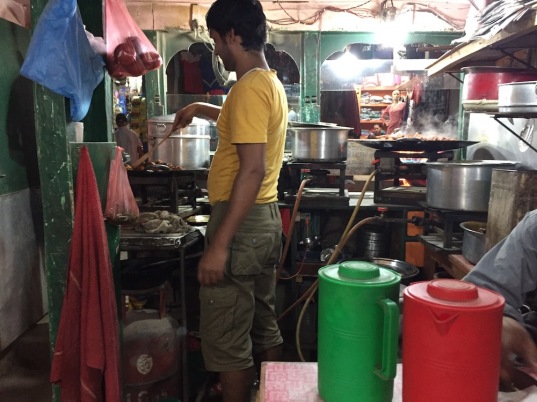 The kind place you eat at against your judgement: a hold in the wall indian food 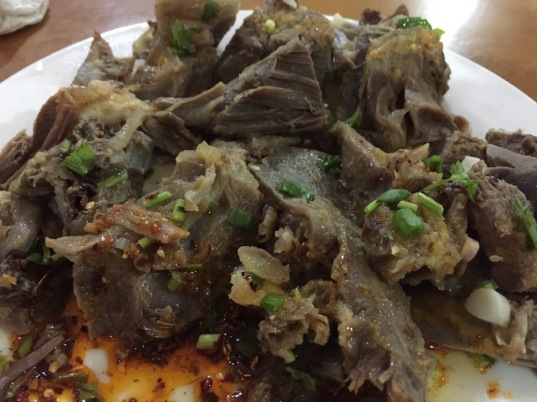 A pound of pulled lamb. YUM! 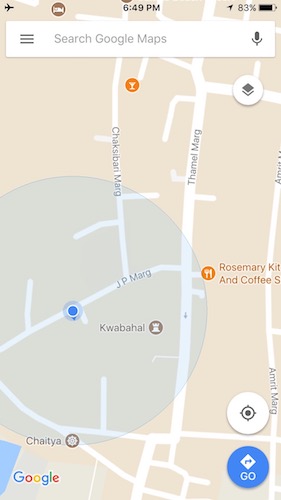 In case you are trying to find this halal Chinese place in Thamel. 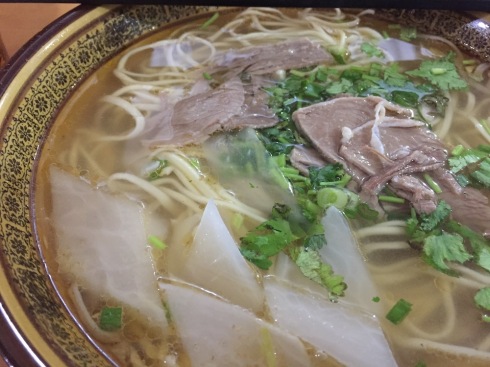 Lots of Chinese places in Thamel. A bowl of hand pulled noodles in a halal restaurant. The soup was loaded with flavors. 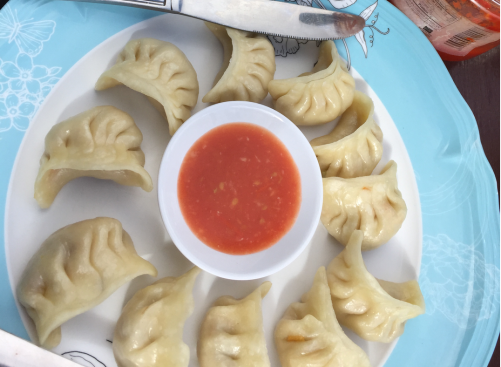 We tried a bunch restaurants that were not found on tripadvisor or any guide books that I have seen. They range from halal restaurants with only Chinese signs to Indian food stalls. These places are not going to be easy to find by my description but I’m confident they will be there if you care to stroll in and around Thamel. One type of Nepalese food that is worth mentioning is Newari food. We stopped at one nameless (as confirmed by the shop owner) Newari restaurant near Bhaktapur durbar square but if we weren’t led by a local guide, we would have recognized the place as a restaurant from the outside. But the food was delicious. 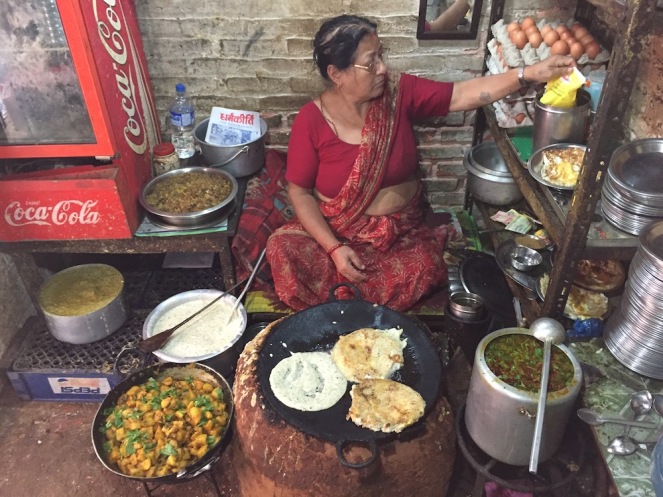 The source of this delicious Newari food 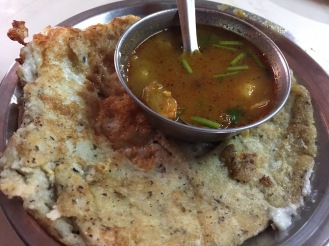 No idea what this dish was called, but it was one of the two things they served at this place. 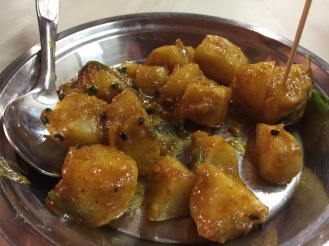 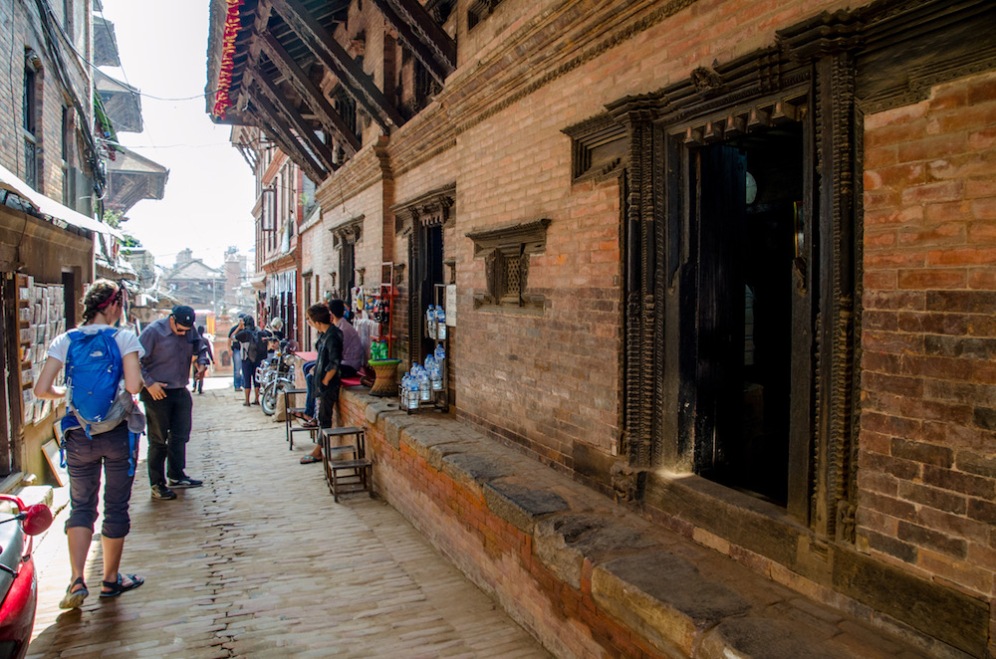 The outside of this Newari restaurant

We definitely pushed our stomach capacity to the limits before saying goodbye to this beautiful country. 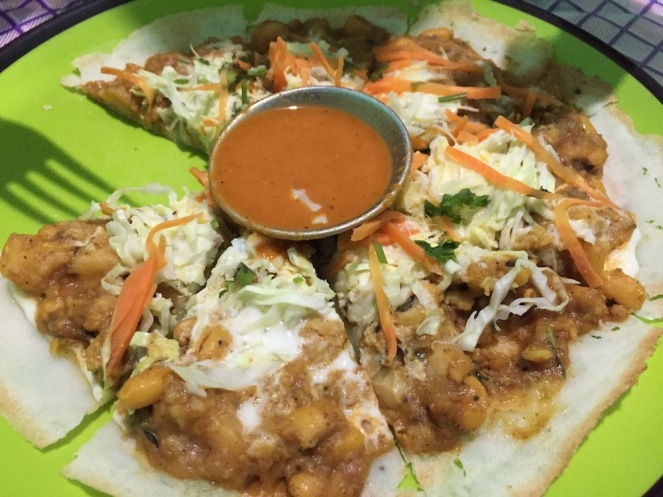 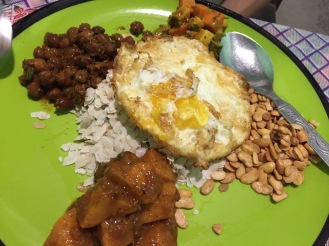 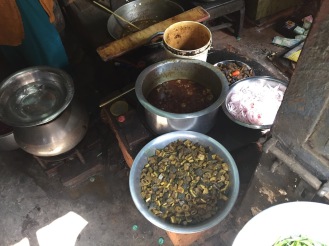 This place smelled so good but we weren’t ready for lunch yet.

Are you planning a trekking trip of own? Check out my packing list.