Good Morning, Mt Everest and Lhotse, for the last time this trek. We may see each other again one day.

Since we knew it would be a short trek to Namche, we took our time in Tengboche in the morning. We had a great time chatting with fellow trekkers who were at the beginning of their exciting trip going up to EBC. By the time we were leaving Tengboche, the village was pretty much empty of tourists. It was nice to find Tengboche so quiet. From Tengboche, it was a long descending trail to the bottom of a valley before climbing back up to Sanasa.

looking out our window at HH 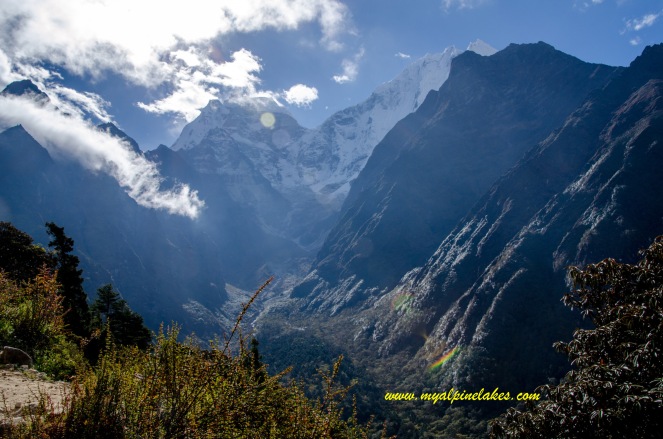 Looking back at the enormous glacial peaks 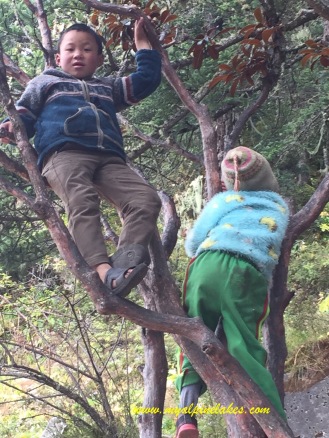 Kids in a tree! 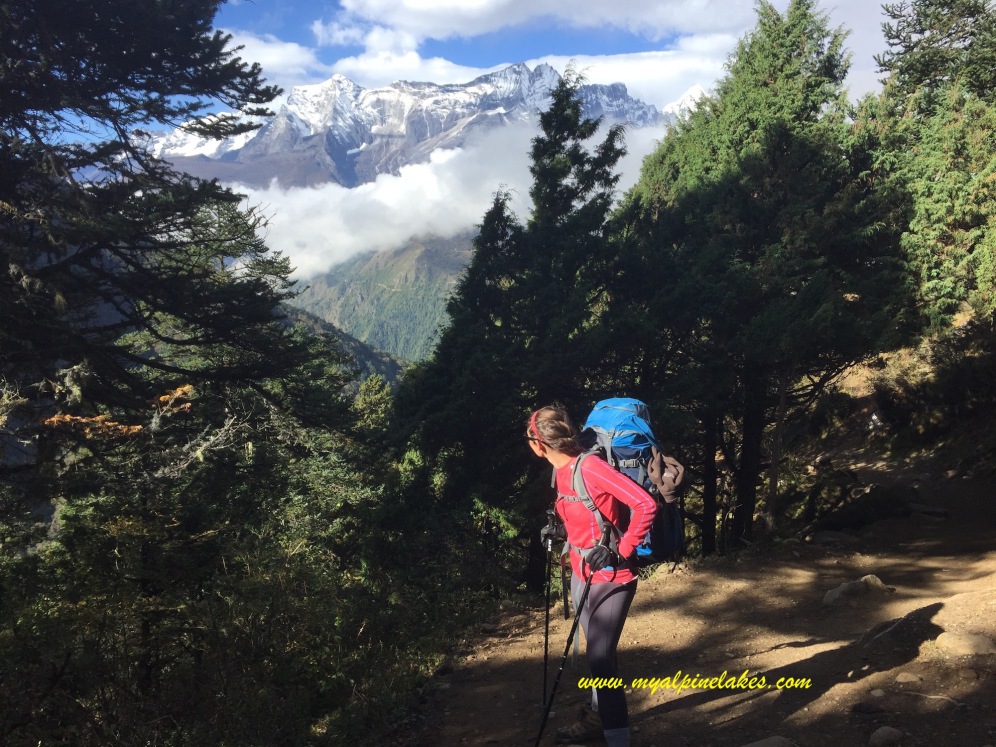 Tricia is already missing the mountains

Last time we arrived to Sanasa, it was practically empty except a few locals. But when we returned to Sanasa it was overflowing with trekkers. The trekking season had blossomed while we were gone. The village main road was lined up with many vendors laying out various trinkets and artisan souvenirs on colored tarps. They were not shy to introduce their products to trekkers walking by, but they weren’t pushy. The sunshine was bright and the sky was mostly clear except a few scattered clouds. The shadow of rooftops cast down on the stone paved road, busy vendors and lingering trekkers. It was a really nice day.

one of many many bridges

We got to Namche just before noon. Of course, we went back to Nirvana. Kami and her kids greeted us with smiles and pleasantries. We were lucky that a large group of trekkers have just left so the hotel was practically empty. We picked a room on the second floor. Tricia and I both took a long hot shower. It was AMAZING! 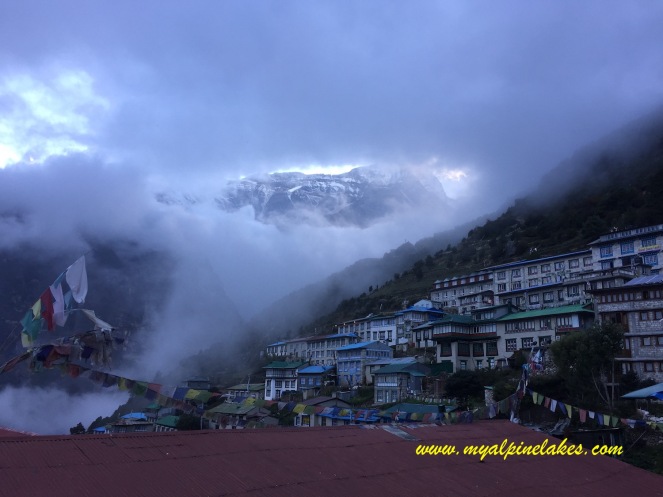 Good evening, Namche. We love you and miss you.

kids flying kites on a rock over a cliff. Does not seem very safe. Can you guess what those pies on the ground are?

We sat out on the patio and had our lunch in the sun. We watched trekkers filing into the village struggling to climb up the hilly terrain in this altitude. We watched local kids running around the stupa at the center of the village. We also saw construction workers shoveling dirt from the foundation of a teahouse that was getting built into a hillside. It was a booming town with lots of energy. I felt a sense of tranquility watching the bustling village from that patio. When the sun finally moved behind the hotel and casted a long shadow over the patio, Tricia and I decided to take a final stroll around Namche Bazaar. We found a little square in the middle of Namche and had a beer with two fellow trekkers from Alaska. It was a fun conversation while watching the sun slowly sink behind Kongde glacier. 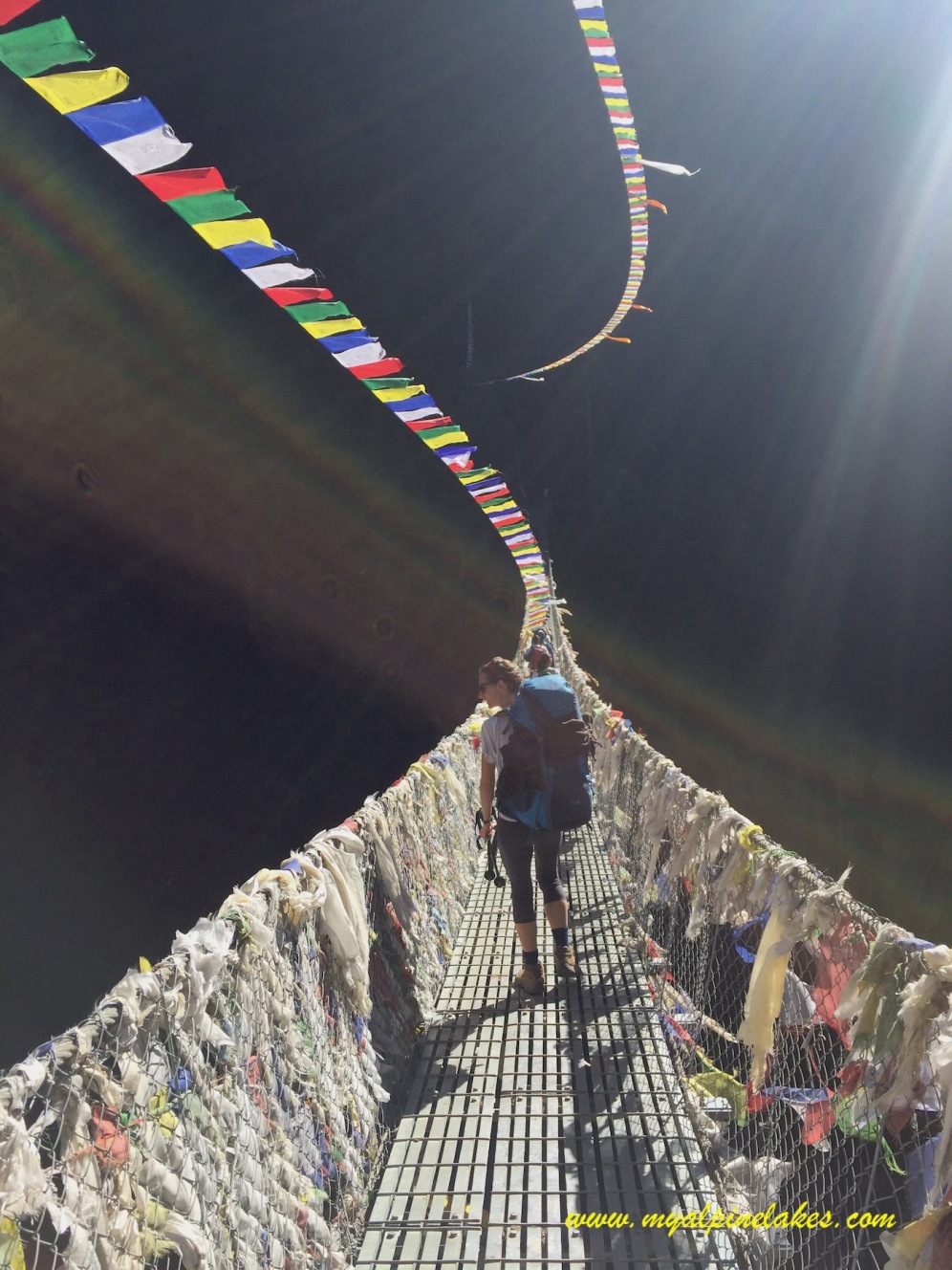 Our final day of hiking lead us back to Lukla. It took us 9 ½ hours to get from Lukla to Namche but only 6 ½ hours in reverse. At each checkpoint, we saw at least three times more trekkers waiting to be registered than we had seen just two weeks prior. We again took a short break at Benkar, which was crowded this time. We got back to Lukla at around 3pm. It was an exceptionally clear afternoon and planes were still taking off from the airport. We had our fingers crossed for the same weather on the next day. Since our international flight was scheduled at 11pm in two days, we had one buffer day in case our Lukla flight gets canceled. If weather prevented us from getting out of Lukla the day of our scheduled flight, we would have to take a chopper.

That night, we learned that a large group of eight Spanish trekkers in our teahouse had not been able to fly out that day. They had already waited three days for a flight out of Lukla. The system is a bit weird. If your flight gets canceled because of weather, you don’t get priority on the next flight. The passengers holding tickets to that flight get priority. The ones with a canceled flight have to wait and hope for an open seat on future flights or if the airline finally schedules an extra flight on a clear day. Since these tiny planes were almost always filled to their weight capacity and the number of flights every day were limited both by weather and Kathmandu air traffic, the chance of an extra seat or an extra flight seems infinitesimally small.

Our flight out was scheduled for 8:30am, which was the earliest flight I could find five months in advance. It was not the first flight of the day though. We got to the airport by 7am and they hadn’t even started registering passengers for the first flight yet! By 8am, we finally got our boarding pass. We were on Tara Airline’s third flight of the day. I saw planes from three different airlines taking turns landing in Lukla. It was a nerve wracking process waiting for our flight as I watched the clouds moving in and out of the mountains around us knowing that the airlines could cancel all flights at any moment. In addition to the weather, Kathmandu air traffic was a big rate limiting step. We heard that there is only one functional runway in Kathmandu International Airport that ran both international and domestic flights. Since the international flights take priority over domestic flights, planes to Lukla were lined up waiting for the opportunity to take off in Kathmandu.

Boudhanath: a giant stupa in Kathmandu

Every time a plane landed on the runway the waiting room erupted in loud cheers only to subside as people realize the plane that landed was not their airline or their flight. After over 6 agonizing hours of waiting and nine other planes, our plane finally arrived! It was almost 1:30pm. The clouds have been creeping lower and lower. I was worried that the plane wouldn’t be able to take off but it did, without hesitation. The flight back was noticeably bumpier than the flight in due to the low clouds. I think I used up all my energy waiting in psychological agony at the airport: I dozed off on the bumpy flight like a baby in a rocking cradle. Kathmandu, rejuvenated and repopulated after Dashain, was waiting for us in the distance.

That was the end of our trekking in Nepal! I hope you enjoyed reading our adventure on this blog. I have two more post on Nepal which will go through our food adventure and some interesting photos in Kathmandu. Please leave me a comment on what you think.

Are you planning a trekking trip of own? Check out my packing list.