Our flight landed in Auckland in the early afternoon and our first task was to pick up our rental car. It took forever for the rental agency shuttle to come around to pick us up from the airport, which was an ominous sign. When we finally arrived to the rental shop, there were a dozen very grumpy French tourists lounging around on the lawn outside of the office and two of them arguing loudly at the front desk in the office. I had a strong feeling that I should not have skimped on the rental. A week before our trip, I was browsing on the internet for cheap deals and found a rental car for $10/day (as opposed to the original $23/day). I cancelled my original booking and jumped on the deal.

When it was finally my turn, I had no trouble getting the booking honored. I was taken to a white Nissan still dripping water from a fresh wash. I took photos of the dents and scratches. Everything seemed good. I took the key from the agent and hopped in the driver’s seat on the right side of the car. It felt very similar to the car that we rented in the South Island, except it had a replacement car radio that a teenager would have installed in a beater in the 90s. And perhaps the engine sounded funny? I thought there was an impatient motorcyclist or perhaps a road construction. When I didn’t find either in sight, I realized that the loud pumping noise came from the engine of our vehicle. That’s when I noticed the odometer of the car– 320,000 km! I had to do a double take to make sure I didn’t miscount the number of digits on the display. There was a reason that this car was $10/day!

Waitomo was over three hours driving from Auckland. We headed to Hamilton, a smaller city an hour to the south, to look for dinner options. Since Yelp doesn’t work well in New Zealand, we resorted to Google for restaurant information. Tricia found a place called Chili House in Hamilton, which had photos of food that resembled authentic Sichuanese dishes. To our surprise, Hamilton was hopping! There were a ton of restaurants and bars and they were packed. People were out enjoying the sun, the food, the drinks and each others’ company. We parked in their Central Business District with 2 hour free parking (we didn’t have any NZ money to pay the meter).

Chili House lived up to its expectations for sure. I got a bowl of beef stew noodles with wide cut handmade noodles. It had good spiciness and good numbing, surpassing my expectations. Tricia ordered two Chinese burgers– Rou Jia Mo if you can read Pinyin– and they blew her mind! For the rest of the trip, she talked about these Chinese burgers every time we sat down at a restaurant. She liked them so much that we ended up coming back to Hamilton again on our last day in NZ.

Tricia was sold after one bite of the “Chinese burger”

We made it to Waitomo after dark. The hotel I booked was called Waitomo Caves Hotel, which has the reputation of being haunted. The decor of this hotel is certainly strange. Large photos of Maori faces with intimidating facial tattoos hung on the walls along the stairwell. Mirrors hung in strange places so you turn a corner and see reflections unexpectedly. A painting of a creepy looking child, whose eyes stared at us in bed, hung on the wall. Even after I turned off the light, I felt like the child was staring at me. I got up in the middle of the night and turned it around to face the wall. No real ghost stories to tell, though.

When I researched Waitomo Caves, I found a bunch of caving guide companies. Tourism is certainly the leading industry in this town. These caves are best known for their glow worms, which are larvae of a mosquito-like fly species. As larvae they dangled down silky fibers coated with sticky beads of mucus from the cave ceiling, and they emit a faint blue light to attract small insects living in the caves. Since we didn’t want to just float into a cave and check a box, I signed us up for a 5 hour adventure. Let’s go explore the caves! 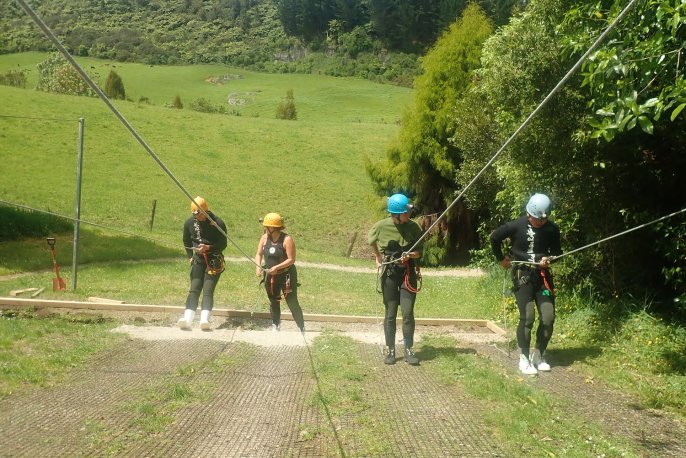 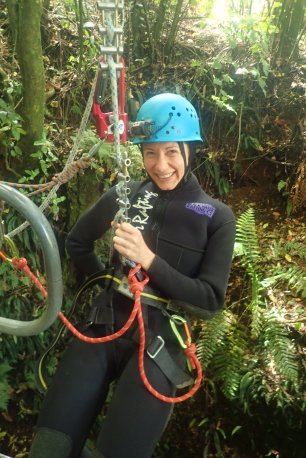 Glamor shot before dropping into the abyss 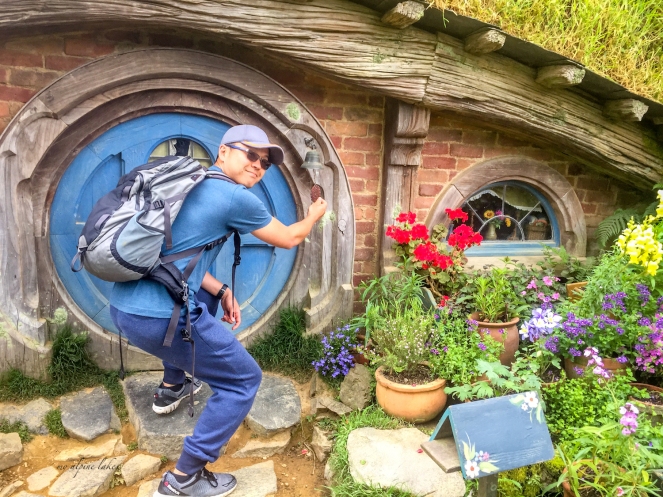 despite my furious bell ringing, no one was home to open the door 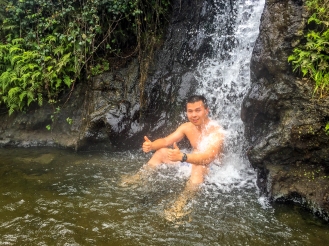 thumbs up for the awesome waterfall

Tricia had her favorite sneaky look on her face

Cute little girl and a dude without shoes in the band

It’s fitting to eat carrots on this tour 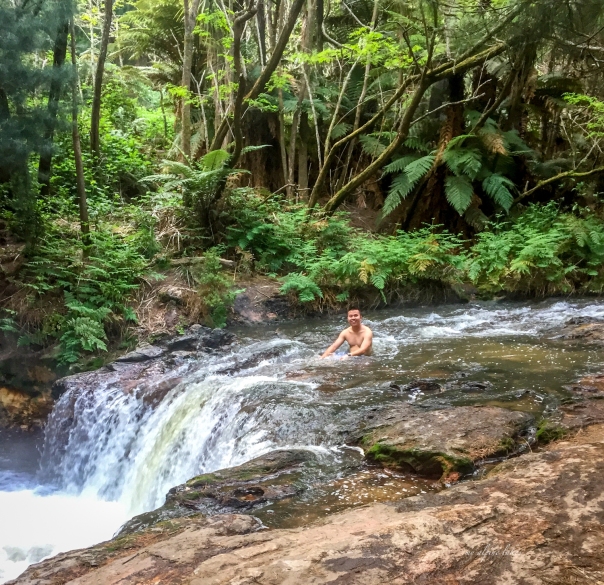 That water was pushing me pretty hard 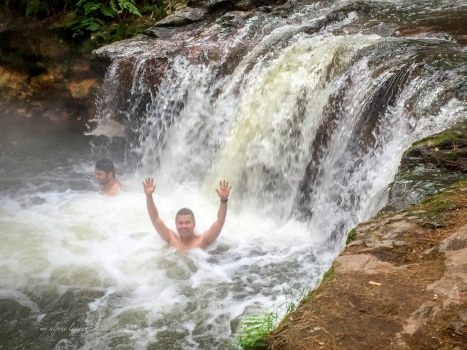 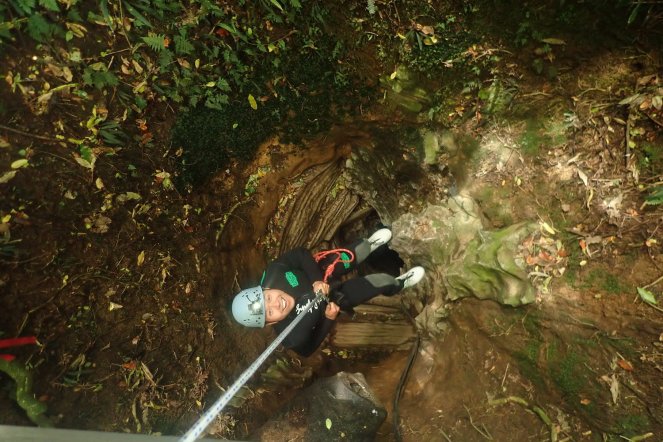 Getting closer to the hole 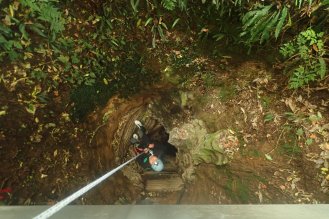 That was a long way down

We met our guides, two female rock climbers from Canada and Australia, at 11 am. They were enthusiastic and patient and awesome company. We had six people in our group for this five hour adventure. We changed into wetsuits, took a group photo and hopped in the shuttle. It was a short ride to the cave entrance, where we were trained to use the abseil 5 bar descender. The first drop was far deeper than I thought. From the platform on the top, I could only see that I was going into a hole in the ground. But once I wiggled my way through the hole, there was another thirty feet to go in the total darkness before I reached the bottom. It was noticeably colder in the cave; I could see my breath.

In next few hours, we ziplined, cliff jumped, and river floated. We climbed up waterfalls, hung out with a large resident eel, and took breaks drinking hot chocolate and taking long exposure photos. When the tour ended, I felt like I could still spend a few more hours down there. Even Tricia, who has always been anti-cold water sport of all kinds, had a great time and later said that the cave was one of the top highlights of our NZ trip.

this guy has no fear of us 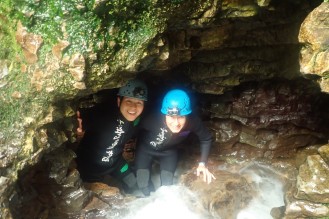 emerging from the caves 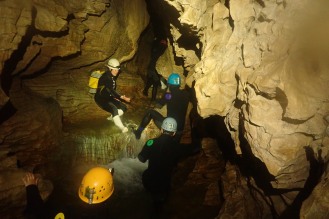 “I need your most serious look!”

After the caves, we headed towards National Park Village near Tongariro with the intention to through hike the Tongariro Alpine Crossing. But a rainstorm was building up– the clouds were low and rain was coming down sideways. I called the shuttle service that I reserved and learned that the shuttle service was cancelled for the next two days. Yikes. Our plans needed to be modified, but what’s there to do in the rain?

I researched Airbnb website for a place to stay near Taupo while Tricia researched options on a rainy day near Taupo. The region around Taupo and Rotorua are known to be geothermal active and there are a bunch free hot springs. We set our eyes on a hot spring called Hot Pools Taupo, which is located next to Waikato River.

We slept in the next morning and didn’t make it to the pool until after 11. It turned out our timing was perfect– there were only three people in the pools. A large hose guided hot water down a waterfall into three cascading pools, which drained into a wide Waikato River. I waded into the pool right away. The temperature was just right; the clouds hung low and a rainstorm threatened over our heads but the rain held off.

thumbs up for the awesome waterfall 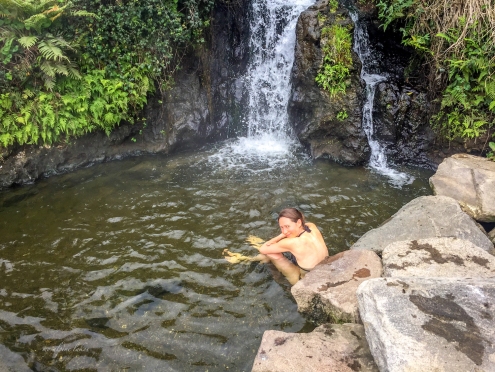 Tricia had her favorite sneaky look on her face

We soaked in the pools for over two hours. When a large group showed up at the hot pools, we got up and headed to our second destination– Wai-O-Tapu. Wai-O-Tapu is a smaller scale Yellowstone-like park with miles of walkways around colorful pools of bubbling water and mud. When we pulled into the parking lot, it was pouring outside so we took a short nap in the car. By the time we strolled down the walkways, the clouds stayed dark but again, rain held off for the rest of the afternoon. 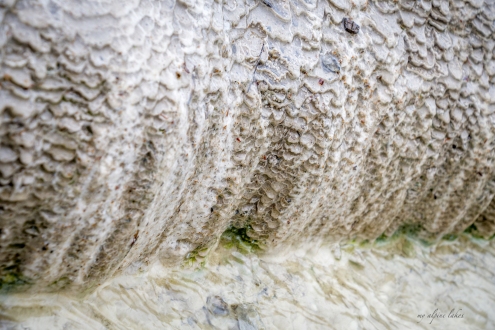 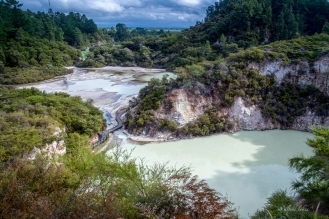 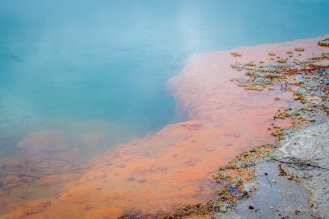 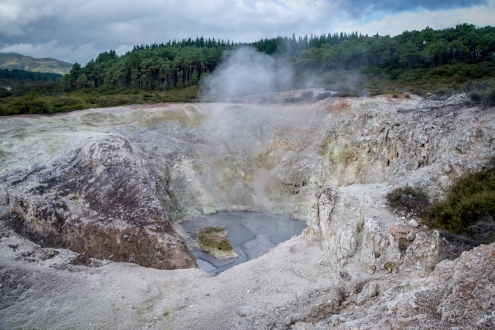 Rotorua is also known for its night market on Thursdays. And it happened to be Thursday today. We figured that we shouldn’t miss out. Dozens of food vendors set up shops along a street in the center of the city. The food was good, the price was right, but many vendors only took cash. Bahh, after relying on my credit card for over 12 days, I was finally forced to withdraw cash. 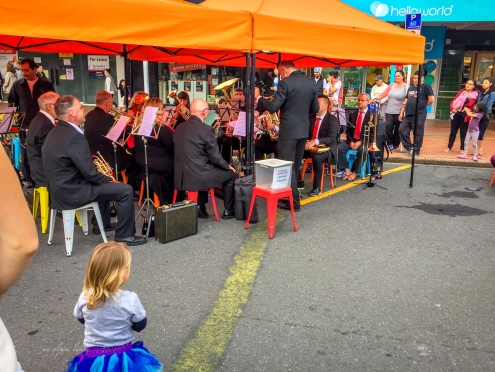 Cute little girl and a dude without shoes in the band

Next morning, we drove to Matamata for a Hobbiton tour. I was underwhelmed. When we were in Waitomo Caves, both of the couples in our group raved about their experiences in Hobbiton. Perhaps they were bigger fans of the Lord of the Rings than we were? I don’t know. The standard tour was $84/person to start in Hobbiton or Matamata. The tours took approximately three hours and included bus rides, time in a gift shop (of course) and a “complimentary” beer break at the end of the tour. Hobbiton ended up being a box to check, but in retrospect it’s by no means a must do in my book.

despite my furious bell ringing, no one was home to open the door 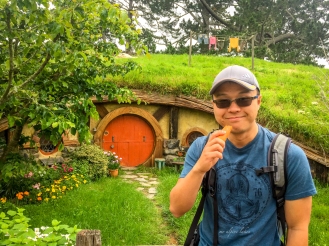 It’s fitting to eat carrots on this tour 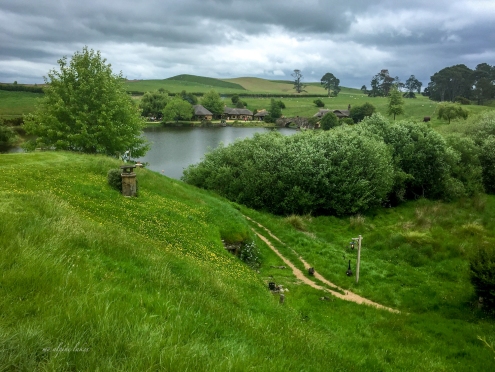 We went for a long run in the Redwoods– Whakarewarewa Forest– in the afternoon. There were A TON of trails in this forest. Tricia contemplated fitting a 30 km loop into our afternoon but was not able to pull it off successfully. We did run many circles in a forest with a relatively flat terrain. By the time we came out of the forest, it was almost 5 pm and I really wanted to jump into a hot spring. I googled my options while Tricia did another lap in the forest. By the time she made it back to the car, I had formulated a plan. We drove south for about 30 mins to a place called Kerosene Creek. The water wasn’t as clear as the previous hotspring we went to, but the water volume was much greater. We soaked for an hour in a hot spring waterfall.

That water was pushing me pretty hard

To complete the night, we decided to try a Korean restaurant in Rotorua. We sat down in the restaurant, and Tricia immediately had buyers remorse. She ordered a Bibimbap, reluctantly. When it came out, she immediately declared it to be the best Bibimbap she has ever had! It was full of vegetables! It was so good that I ordered one of my own, in addition to the tofu pork stew that I had already ordered. 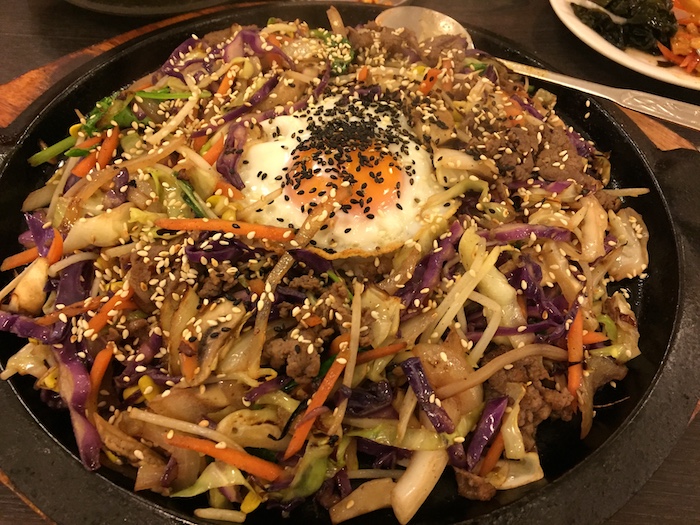 That concluded our three days of adventure in the North Island. But our adventure here wasn’t over yet! Remember how the weather prevented us from doing the Tongariro Alpine Crossing that we had to resort to poor weather alternatives? Well, the weather took a turn for the better on Saturday, and we took a turn of 180 degrees straight back to the trailhead. Tongariro, here we come!

Coming up on my next post: Tongariro Alpine Crossing!