Remember the sad note in my previous post that we had to cancel our plans to hike a trail called Tongariro Alpine Crossing? Well, we did it anyways. We kept a close eye on the weather forecast of the entire region during our rainy days, and it paid off– our last full day in New Zealand was predicted to be sunny.

We obviously weren’t going to waste a gorgeous day, but we were staying in Rotorua, which was two and half hours away from Tongariro by car– and it is in the opposite direction to Auckland, where we would catch our flight home the next day. So should we still do it? Of course, you know we were doing it!

Tongariro Alpine Crossing is a 12.1 mile through hike, meaning it goes from one point to another. Unlike a loop hike, like Kepler, Tongariro hikers require transportation support. I found a shuttle service costing NZ $40/person round trip (fully refundable). I knew this service was reliable because I had to call them to cancel my original booking three days prior, and they were cordial about it.

We woke up at 6:45 am in Rotorua on Saturday and headed out for Tongariro National Village by 7 am. We made it to the shuttle stop by 9:30 am. The sun was bright, the sky was blue, and where it used to be a field of fog and rain stood an enormous volcano, Mt Ngauruhoe. The view was dramatic. It was crazy to think that during our stay three days ago we had only seen a field of white mist and raindrops coming down sideways in the gusting wind.

We caught the 10 am shuttle, which dropped us off at Mangatepopo car park before 11 am, and started our hike from there. The first segment of the hike had almost no elevation gain. We walked eastward briskly on a wide and flat trail, overtaking many groups of slow hikers. Mt Ngauruhoe is a perfectly conical mountain with a giant volcanic crater on the top, and half of the cone was still dusted with snow in this early summer season. We had a wonderful view of it until a dark cloud drifted over, threatening to hide it from us entirely. “This is not happening to us again!” I must have thought it out loud because Tricia replied defeatedly, “Well, it’s mountain weather.” We hastened our steps, but we were no match for the changing weather.

After about 3 miles of relatively flat trail, we started to gain elevation with each step. Many hikers slowed down in this segment, causing congestion. We did our best not to linger as we hiked around the slower tourists– many of whom seemed to have little to no hiking experience– weaving through traffic on the small mountain trail. The incline quickly gave way to a mile of flat terrain, which led us around the base of Mt. Ngauruhoe and a glacial melt yellow colored lake that looked like a giant mud puddle. A bunch of people were taking their lunch breaks at this lake. Tricia and I looked at each other; both of us pulled down the corners of our mouths– we still had energy to go a little higher. Let’s keep going! 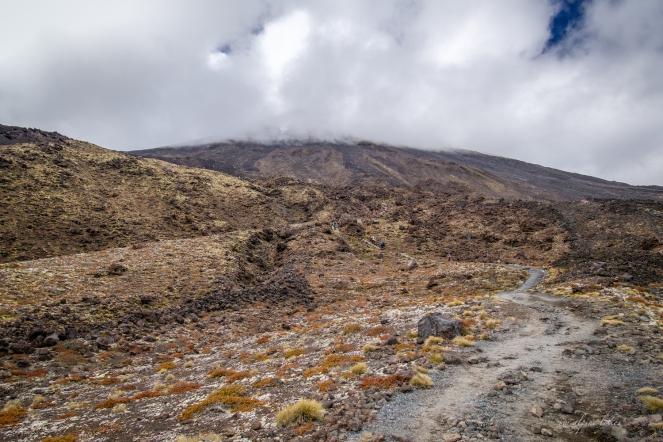 The trail headed up 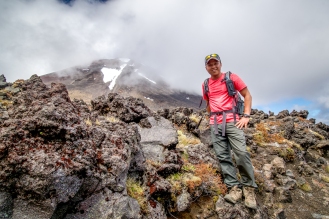 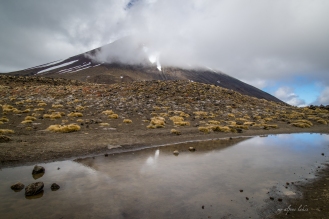 reflection of cloud covered volcano in a puddle 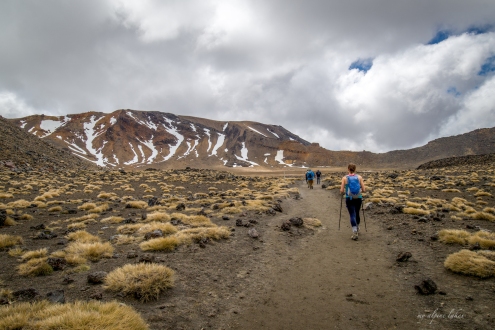 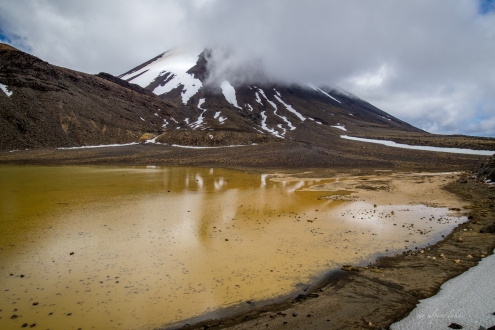 The next section of the hike was probably the steepest incline in Tongariro. It was short, but scree made the trail more difficult at moments– it was nice to have hiking poles!. We made it to the top in 30 minutes. A lot of people hung around to savvor the view: Mt. Ngauruhoe in front of the muddy yellow lake in the front and Red Crater in the back. We walked to the far end of the ridge, where few people ventured, and had our lunch. 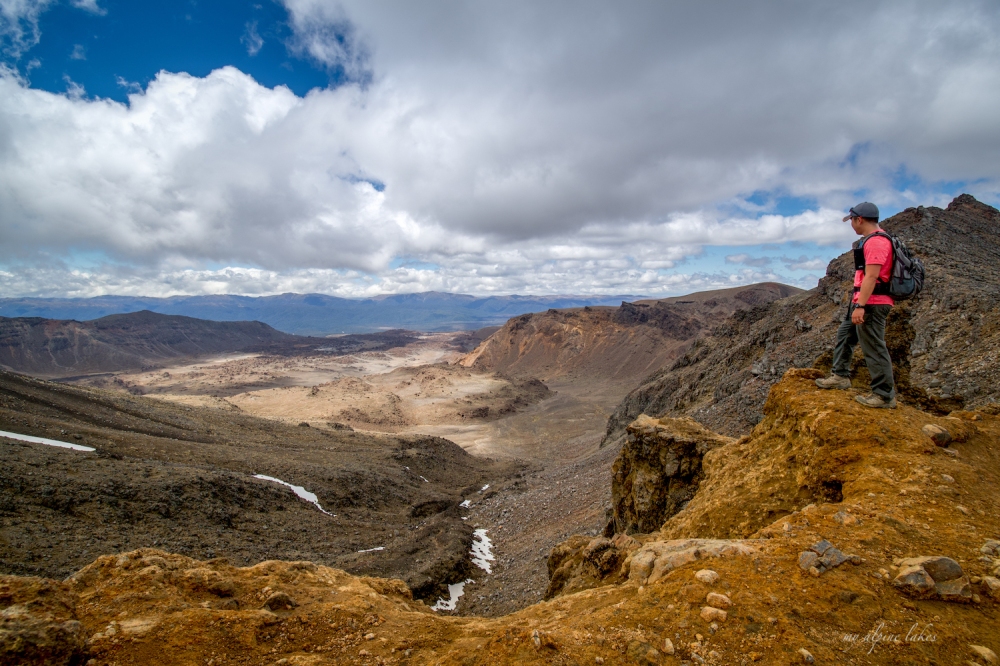 About 5 minutes to the north of our lunch spot, we found the highest point of the Tongariro through hike. It was a crowded spot and we happened to arrive to it at the same time as a large group of rowdy college travelers. As we headed down the hill, we faced the best view of this hike yet. The martian terrain of Central Crater spanned the background of a chain of colorful Emerald Lakes. Notably, many inexperienced hikers struggled on the way down the scree and ash filled volcanic hill. I’d highly recommend that novice hikers bring hiking poles for this segment. 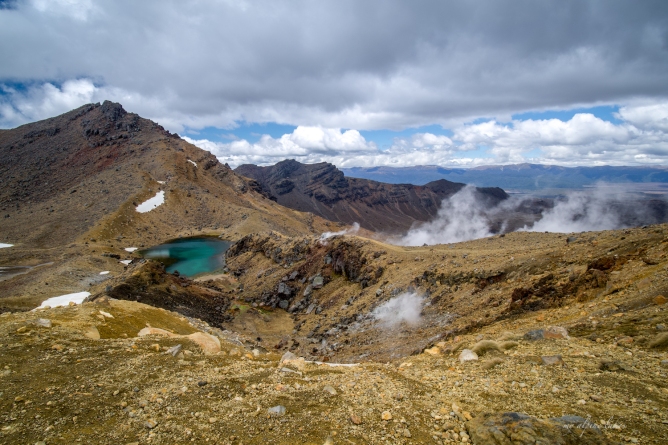 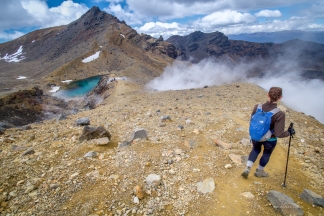 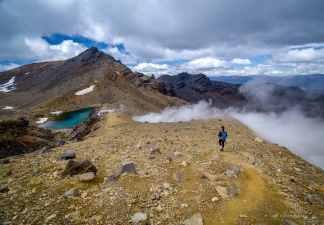 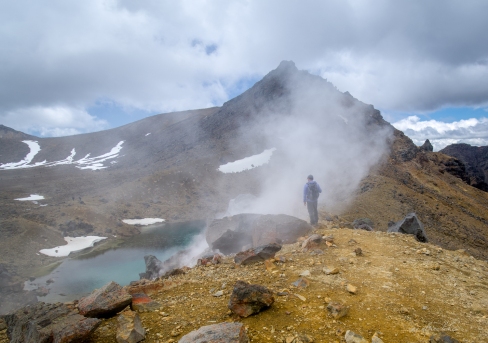 After climbing out of the Central Crater, we found ourselves in front of another giant lake, Blue Lake, which was perfectly still, like a mirror in the ground. At this point, we didn’t want to linger for a couple reasons: one, if we moved quickly we could make it to an early shuttle and return to Tongariro National Village before the grocery store closes (we hoped to cook ourselves and the only grocery store in town closes at 6pm); two, Tricia needed to pee but, which was problematic on a very crowded, very exposed trail. 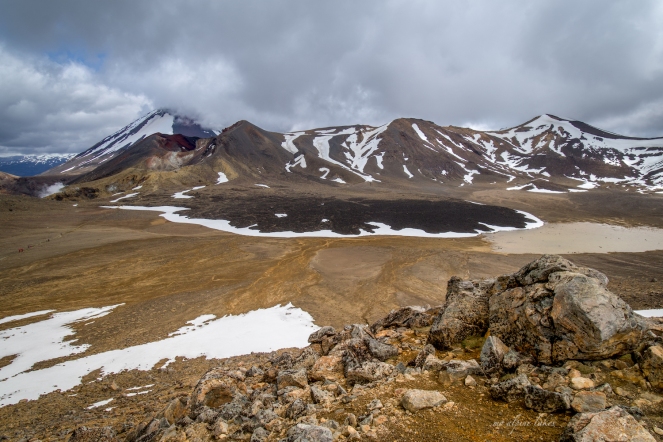 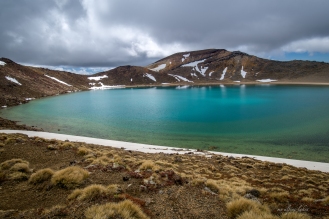 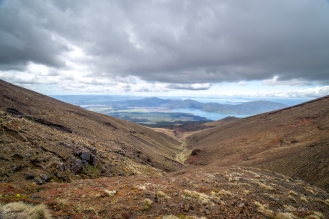 We marched on quickly. The ground was showing signs of geothermal activity. We saw patches of yellow sulfur stains on rocks and steam spouts rising to the sky. The trail was well maintained, covered by wooden boards and rubber mats. By this time, we’d caught up with hikers from many earlier shuttle groups. The trail, which was narrow and zigzagging, became very congested and it was impossible to pass, so hordes of people, in a single file line, moved, at the same speed as the slowest hiker in the front, down a mountain like an awkward human train. Some people were noticeably suffering because the train moved faster than their natural pace, while others suffered by their impatience of the slow moving crowd.

We were stuck in the middle of the human train for miles on the way down until I decided to take a breather about a mile before Ketetahi Falls. We stood at the side of the trail for about 5-10 minutes and watched the human train pass, rumbling down the mountain. Then, viola, the trail cleared and there were no one around. Tricia and I look at the each other in amazement. The forest felt quiet, and we found ourselves in peace for the first time in hours. How wonderful!

Ketetahi Falls was a couple hundred yards off the trail, easily accessible on a small detour. Most of people were too tired to take any detours at this point on the hike and walked straight past the sign. Since we were no longer pushed along by the human train, we decided to take a look. It was a sizeable waterfall with no spectators. We took our time, peed in privacy, and took pictures of the waterfall. By 4 pm, we found ourselves at the Ketetahi Carpark where our shuttle was already waiting.

While we took quiet pride in being the first among the 10am group to make it to the return bus, I was genuinely concerned that many people from the 6 am and 7 am groups hadn’t been checked off the driver’s master list. The last shuttle out was scheduled for 5:30 pm; it was a long day for some unprepared hikers.

That was our Tongariro Alpine Crossing day! In terms of natural beauty, I would rate this hike 9 out 10 among all the hikes I’ve done around the world. However, as an outdoor experience overall, I wouldn’t rate it above 4 or 5 out of 10. The hike was so congested with people that it– sorry for my snobbiness– shared a likeness with a trip to the Disney World.

Have you done this hike? What do you think of Tongariro Alpine Crossing? In my next post, I will break down the cost of our trip and talk about some cost saving strategies that I had figured out during our trip in New Zealand. Keep on following us!