We started our morning with a trip to Denali National Park kennel, where the rangers keep and train their huskies. The dog show was apparently popular since the audience section was filled with tourists. A ranger named Patrick gave us a spiel on the history of huskies in Denali and the critical roles they continued to play, especially during the winter season. After the show we took ten to fifteen minutes to walk around the kennel and pet friendly sled pulling dogs. 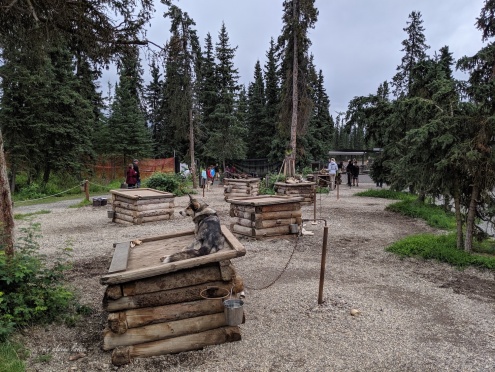 After the dog show, we drove to Savage River Campground parking lot for our first trail-less hike. In my vision, we would cross Savage River at the shallow part, climb up the hill on the other side, traverse the plateau and have lunch by a lake deep on the plateau. 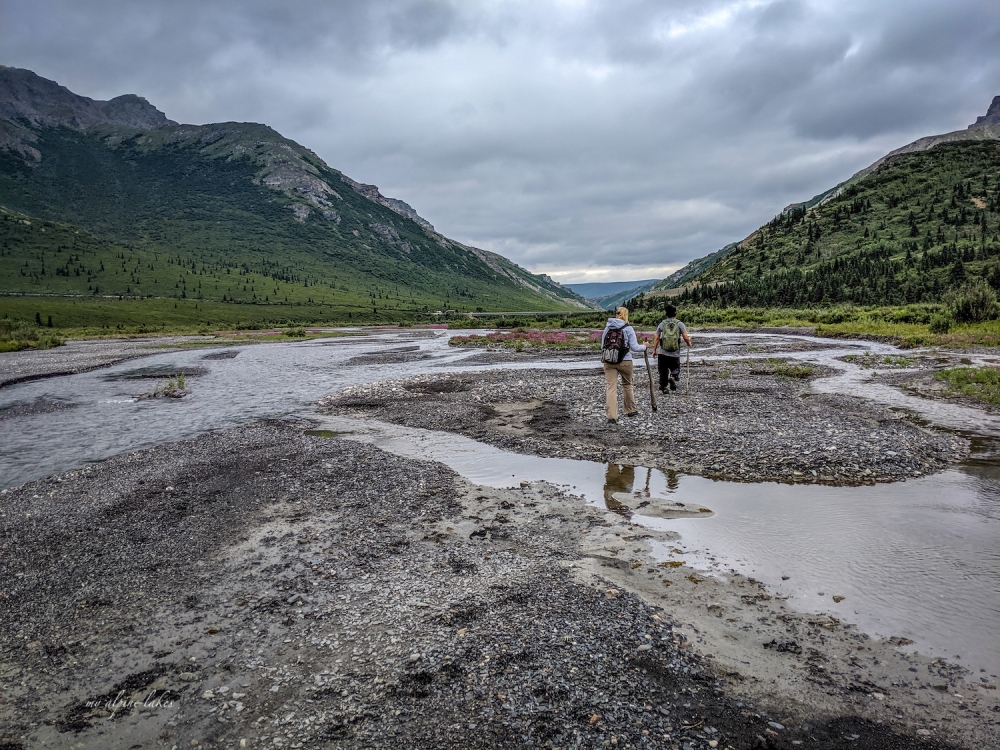 As soon as we left the parking lot, we encountered our first challenge: crossing Savage River. Because the river splits at various locations, we had to be strategic in choosing the point to cross. While minimizing the number of times we had to remove our shoes, we also wanted to cross at a broader and shallower part of the river so that we wouldn’t get swept away by the river. As I was speculating and hesitating on the bank of the river, my friend Chris charged headlong into the water fearlessly. The water was bone chilling cold. By the time I got to the other side, I went into a spontaneous tap dance trying to warm up my aching feet.

Do you see a way out of here?

The soil is very soft under my feet

It appeared that plenty people had crossed Savage River as we encountered a ton of random footprints. On the other side of the river, we found ourselves in front of a wall of eight feet tall shrubs. It was daunting for a second, but we were able to circumnavigate this dense section of shrubs. As we waded farther into seemingly endless shrubs, I noticed the soil under my feet got softer. Mosses covered the soil, discoloring the ground with various shades of green, yellow and red. Occasional wild flowers blossomed passionately. It was beautiful. 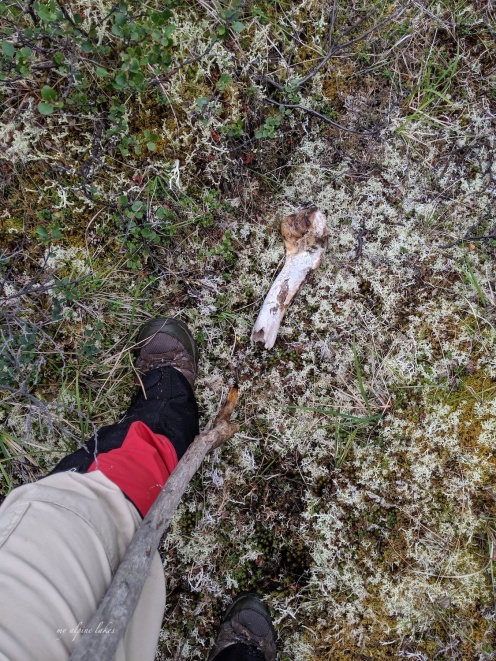 I think something died here

Because the soil was so soft, each of our steps sank in a few inches. It felt similar to walking on a sandy beach: slow and strenuous. We climbed up the plateau and found nothing but more shrubs as far as our eyes can see. Occasional pine trees stood tall and far in between. The lake was nowhere in sight.

Perhaps we should head for Savage River bridge instead? It didn’t take much convincing for us to make that decision. We turned north, cutting across the plateau, and headed towards the Alpine Loop Trail. We ran into a couple campers who were headed for an “old wagon trail” that the rangers had mentioned to them. I told them about our failed attempt to locate the lake and bid them good luck on their adventures. We hit the river again in 20 minutes. This time we sat down by the river and enjoyed our lunch– delicious PB&J sandwiches and trail mix. 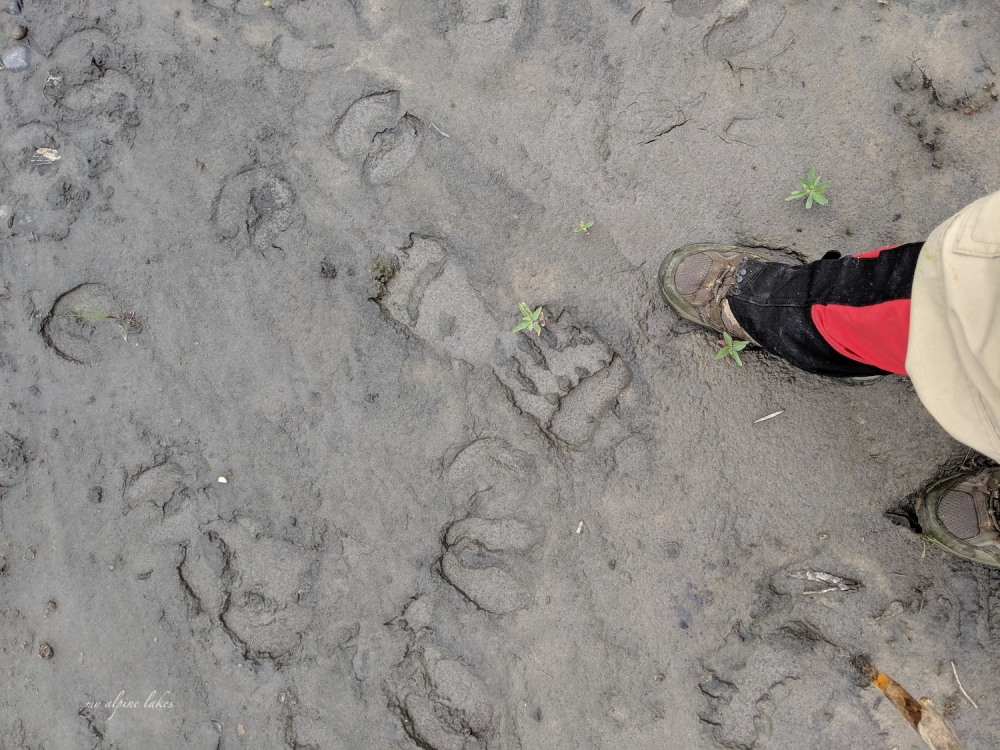 Hiking along the river bed required occasional leaps over small streams and good old fashioned shoes-off for larger streams. But we made it to the Alpine Loop Trailhead by 2 pm. We were ahead of schedule that I had in mind.

The Alpine Loop was a little over 4 miles long, going up a pass and coming back down to Savage River Campsite parking lot. The total elevation gain was about 1600 ft. It took us a little over an hour to get to the pass, where we looked down at the plateau that we bush-whacked through. The lake in the middle of the plateau was completely dry.

By the time we got back to our car, Allie was not quite satisfied. “Let’s go check out Horseshoe Lake!” Horseshoe Lake is near the visitor center. A gentle descent lead us down to a flat walk circumferential to a turquoise lake. The lake was dammed multiple times by residential beavers. These little guys diligently gnawed down what used to be a forest over the years and sectionalized the lake for their fishing adventures.

We concluded our last day in Denali at the 49th State Brewing Co. Again, with a cold one in our hands, we celebrated the success of our trip and toasted to many more adventures in the future. Have you visited Denali National Park? Any suggestions to me or other fellow readers?